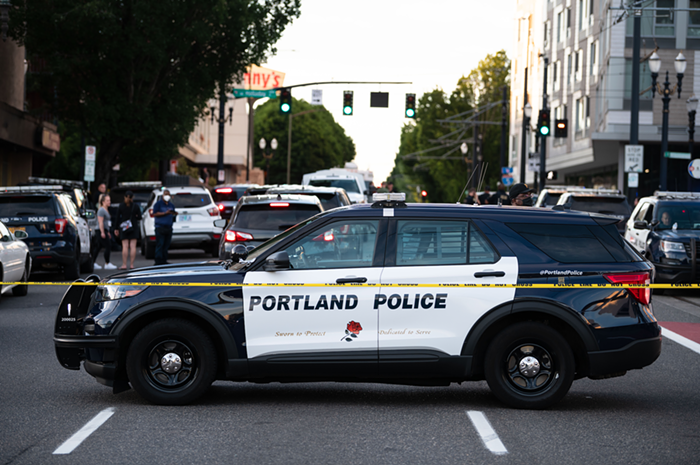 GOOD MORNING, PORTLAND! Man, it’s a hot one. Like seven inches from the midday sun. Well, I hear you whisper and the words melt everyone, but you stay so cool. LET’S GO TO PRESS.

• Last night, a man who was apparently in mental health crisis was shot and killed by Portland Police in the Lloyd neighborhood. Currently there are scant details on how it all went down, and thus far the police have refused to have a press conference. According to sources talking to the O—quite possibly the cops themselves, so take the following with a grain of salt—the victim was allegedly armed with a screwdriver and rushed the officer, though the man was apparently shot in the back. This is the second police shooting of a person in mental distress this year, and follows the refusal by certain City Council members (Mayor Wheeler along with Commissioners Mingus Mapps and Dan Ryan) to fund an expanded version of the Street Response Team—unarmed mental health experts and medical professionals tasked with responding to people in mental crisis, without involving the cops. We’ll have more on this story as details are revealed.

Crowd control munitions in use at active crime scene pic.twitter.com/m4k0INNjwI

• Whether houseless or housed, listen up: To protect the public from the heatwave that’s coming down on us this weekend, Multnomah County has extended the hours of cooling stations across the county, and public libraries as well as TriMet are stepping up to the plate to help as well. Find out all the info you need to know from our Isabella Garcia.

According to the @NWS, many parts of Oregon are expected to reach record-breaking temperatures over the weekend.

Learn more about the signs of heat-related illness and what to do if if you see someone with these symptoms: https://t.co/zDz88J7iXJ pic.twitter.com/mSP2k2yPM6

• GOOD NEWS: The federal government has extended the national eviction moratorium from June 30 to July 31—giving tenants an additional month to gather rent money. But waitasecond… how does that work with the state’s moratorium which doesn’t extend past June 30? Umm… it’s COMPLICATED. Luckily our Alex Zielinski is on hand to break it all down.

• More GOOD NEWS: Even as Republicans in states across the nation pass laws to prevent people of color from voting, Oregon has approved a bill allowing voters’ ballots to be accepted, even if they’re mailed on election day.

• According to the Oregon Health Authority, they expect the highly transmissible Delta variant of COVID-19 to sweep through the state in the coming weeks—though if you’re vaccinated, you’re almost certainly protected. If you aren’t… well, I’ll just leave this headline here for you: “Nearly all COVID deaths in US are now among unvaccinated.”

• The death count from the collapse of a Florida condominium continues to rise, after rescue workers recovered four dead bodies from the site. Meanwhile, up to 159 people are still missing.

• This could be a fly in the corrupt GOP’s ointment: The state of Georgia is getting sued by the Department of Justice for passing shitty, racist anti-voting laws clearly designed to discriminate against Black Americans.

• Former officer Derek Chauvin—who murdered George Floyd by kneeling on his neck for nine-and-a-half minutes—is expected to be sentenced today and legal experts predict he might serve 20 to 25 years.

• After a meeting yesterday with a bipartisan group of senators, President Biden has announced that they “have a deal” on an infrastructure plan that’s scaled-back from Biden’s original $2 trillion version, but opens the door to future deals on the president’s bigger priorities.

• Well this could be awkward: Officer Michael Fanone, who was injured by Trumpy domestic terrorists while trying to protect the Capitol on January 6, will be meeting face to face with House Republican Leader Kevin McCarthy, who originally begged Trump to stop the rioters and later watered down the events of that day and voted against a commission to investigate the insurrection. See ya, Kevin! Wouldn’t wanna be ya!

The pair were given up by a congregant of their church who went to the Capitol with them, the feds said https://t.co/xGIozSM6hB

• From the makers of HUMP! and SPLIFF comes a new film fest that features short documentaries made by YOU! It’s called SCOOP! and you can find out more about it here.

• And now… THE WEATHER REPORT: Get ready for more “hot” today with the high creeping up to 95!

• And finally, here’s “Andrew Giuliani” to remind you that his stepfather Rudy is a LUNATIC, but after all. America was founded by LUNATICS… OKAY?!