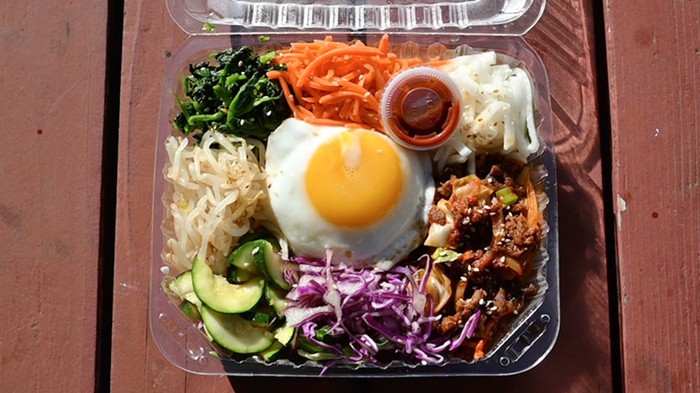 Northwest 23rd Avenue is often painted as a hopelessly unaffordable street with nothing but boutique shops and pricey restaurants. But sandwiched neatly into one of NW 23rd’s long standing storefronts, Korean resturant Bibi2go presents an affordable range of healthy, flavorful dishes, and their takeout skills cannot be beat.

So often—of late—I have run afoul of bad takeout experiences: cancelled orders, rude denials of service, or hour-long waits to pick-up dinner. I can only imagine how hard it must be out there for restaurants as they figure out how to open, but I’m also a little baby who WAITED until the last minute to plan dinner—and I’m so hungry I’m traversing time and space!

Northwest’s Bibi2go has saved my blood sugar on many occasions. As might be expected from their name, their takeout skill is next level. From presentation to packaging to having your order ready speedily, Bibi2go has been destroying the competition. The other day I waited in line for fast food for over a half an hour! That’s my fault! Because Bibi2go looks beautiful, is family-owned, and is ready in a swift 15-20 minutes.

The main dish on their menu is bibimbap. And if you haven’t had bibimbap, you must get some into your life. It’s like getting six Korean side dishes of pickled or otherwise prepared vegetables, atop a bed of rice, with a partially fried egg on top.

In a more traditional setting it would be served in a stone bowl, but Bibi2go’s plastic to-go container holds up well. Mine always comes with “MIX!” written on top because, if you’re unfamiliar, you might not know to stir the artfully arranged assortment into a delicious fusion of egg, rice, and everything else. Also, bibimbap essentially means “mix rice.” 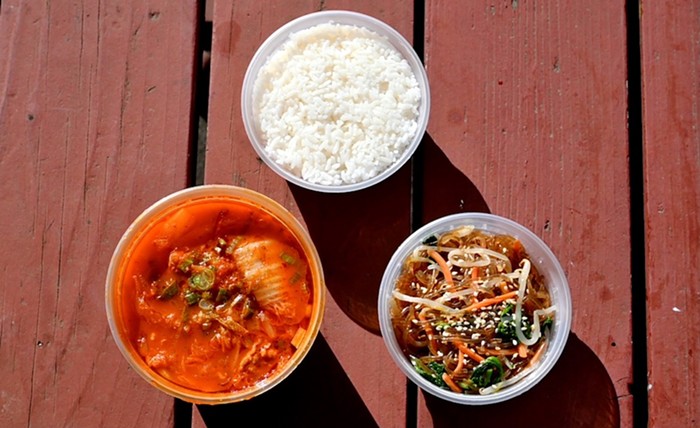 Kimchi soup with a side of japchae and rice Suzette Smith

Bibi2go’s bibimbap is extremely customizable. They offer a vegan version that offers seaweed instead of egg. Another option substitutes sweet potato “glass” noodles for rice. Of the assortments of stewed meats available, I recommend the spicy beef and spicy pork. Each bibimbap comes with house made gochujang (chili pepper paste), but it comes on the side so you can control your spice level. It’s not spicy, in my opinion, as much as it is sweet.

Portions are enormous at Bibi2go, so you’ll generally have some leftovers. A recent order of the Kimchi-jjigae lasted for three meals because it came with a side of rice and japchae—a savory and sweet side dish of stir-fried vegetables and glass noodles. Eat it separately, or mix it in.