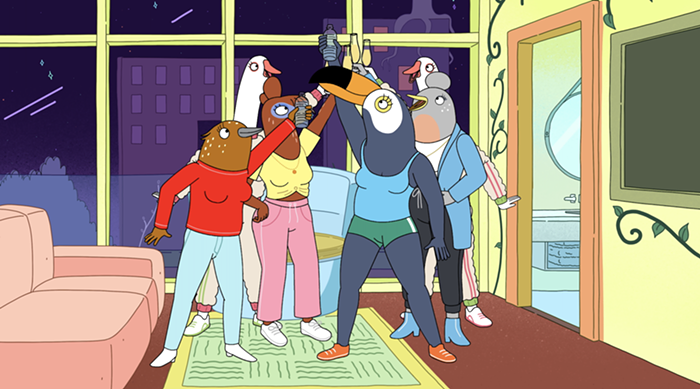 Well ladies, our collective outrage/complaining/petitioning has finally paid off: After Netflix announced it was cancelling Tuca & Bertie in July 2019, a year later Adult Swim picked up the grown-up cartoon for a second season.

Premiering on June 13, season two has more of the same genius, highly relatable, and surreal content featuring besties Tuca (voiced by Tiffany Haddish) and Bertie (Ali Wong), and Steven Yeun as Bertie’s live-in boyfriend Speckle. Created by cartoonist Lisa Hanawalt (Bojack Horseman), season two continues the first season’s tradition of allowing the episodes to get deeper than your typical adult cartoon, always tackling tough topics and emphasizing the humanity of Bird Town’s cast of animal characters, but balancing that with a remarkably funny script, wildly illustrated jokes, and even some horror elements.

Thankfully, it looks like all the humorous periphery characters are back in season two, even if they’re just seen doing something character-specific in the background, like the two “best friend” rhinoceros DJs making out in a booth at the fast food joint. Actress and stand-up comedian Nicole Byer returns to voice various characters (after playing the real estate agent/rogue filing cabinet/Speckle’s grandmother cake in season one), and the excellent Jenifer Lewis reprises her role as Tuca’s aunt Talulah. Other guest voice stars include Pamela Adlon (King of the Hill), Michaela Dietz (Steven Universe), SungWon Cho (Anime Crimes Division), Jermaine Fowler (Coming 2 America), Richard E. Grant (Spice World, The Iron Lady), and many more.

In the four (out of 10 total) episodes released for advance screening, there’s more than enough here to devour and dissect. Episode one (“Bird Mechanics”) sees Bertie enter the world of therapy so she can find a way to prevent herself from spiraling into panic attacks. The episode makes light of the overwhelming journey of looking for a new therapist online; she meets every kind of therapist imaginable, and one of the most relatable experiences shown is when she meets one who goes overboard on the compliments and acts like more of a desperate, people-pleasing wannabe friend. While Bertie tries to “date” as many therapists as possible until she finds a good fit, Tuca embarks on a Sex Bus, a pseudo-reality show in which contestants compete for Tuca’s casual interest, which proves difficult due to her rigorous judging system and the contestants’ inability to compete with her BFF Bertie’s place in her heart. Although she is quite focused on not being single anymore, Tuca worries that she doesn’t have much more room in her heart for anyone other than Tuca, Speckle, and the limited family she has left. Tuca’s replacement for therapy is screaming her feelings into an empty cup, labeling it, and then turning the cup over and placing it behind the toilet—a couple of which read “JEALOUS OF DOGS” and “ANGRY (lost my hat),” before the episode’s ending cup: “BERTIE’S KEEPING ME ALONE.”

While the show doesn’t shy away from serious topics, it’s never so heavy that it takes away from the show’s hilarity and cackle-worthy little details. Tuca and Bertie are simply experiencing the growing pains of best friendship—it’s hard to know when it’s okay to lean on a friend with one’s issues, and even tougher realizing that sometimes our closest friends can hold us back. 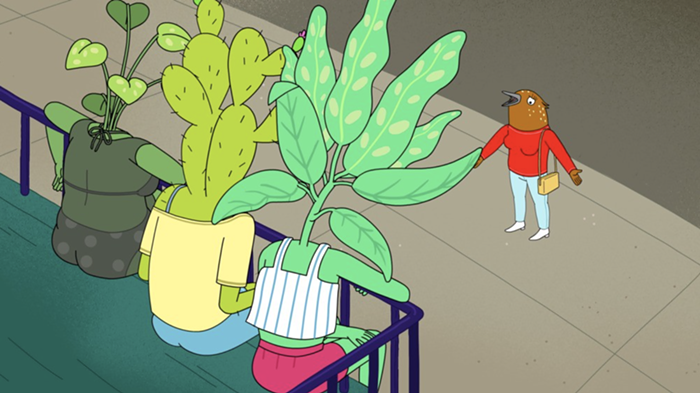 Episode two (“Planteau”) is wild and centers on Speckle’s sister’s bachelorette party in Planteau, an ecological wonder with lots of rare native flora. Bertie agrees to be recovering alcoholic Tuca’s sober wingman so she doesn’t have to be the only one not drinking, but overlooks her own struggles with social anxiety and approval-seeking behaviors. In the Bird Town universe, even plants are conscious, and the mayor of Planteau is a potted plant that lives in a museum, and the bachelorette party strippers are dancing tomatoes with rippling pecs. When Bertie decides to drink to help her social anxiety, she and Tuca get into a disagreement while Speckle—who’s also in Planteau for his future brother-in-law’s bachelor party—trips from a hallucinogenic plant cutting. There are also some incompetent frenchie breed dog cops who come to report on Tuca and Bertie’s robbery, and are delightfully voiced by tiny children (“I got this job right out of high school!”).

Every episode has fantastical elements. In episode three, Bertie goes to therapy and dreams up her “bro” alter ego, Kyle, while trying to think of a way to deal with her obnoxious coworker Dirk’s distracting office behavior. With the help of one of Bertie’s incredible pastries, she actually brings Kyle to life, where he plays a chaotic role in her pastry business. In the fourth episode, (“Nighttime Friends”) Bertie repeatedly succumbs to TV-induced narcolepsy (more relatable content), while Tuca suffers from insomnia, and Speckle gets a smartwatch to track his steps, leading him to sleep-walking and even sleep-biking. Tuca roams the streets at night, visits her mom’s grave and sees Auntie Talulah in the hospital, where Tuca’s given power of attorney over her aunt’s medical decisions. Highlights from season two so far include when Tuca hitches a ride with a street cleaner and then hijacks it; and the fact that there’s also cartoon bird drag in episode four, a clear parody of The Rocky Horror Picture Show which is dubbed here as Vintage Sexy Campy Movie.

Tuca & Bertie continues to set the bar high for intelligent, funny, and touching commentary about living as a woman in a distorted and flawed world. This isn’t the type of show you can put on while you scroll your timeline on your phone and simply listen to the dialogue. Many of the show’s funniest bits are embedded in the artwork and physical comedy of the drawn characters, which makes the rewatch value extremely high—you’re not going to get it all the first time through.

Season two of Tuca & Bertie premieres on Adult Swim at 11:30 pm Sunday, June 13. The season will be made available on HBO Max in 2022. You can watch season one on Netflix now.