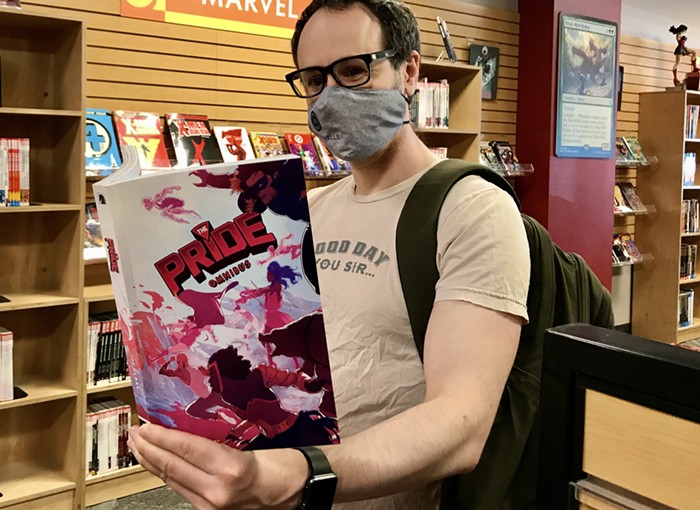 The last year has given many of us a sort of social jetlag, a disorientation around the people we choose to spend time with and what we choose to do with that time. It’s a perfect opportunity to reconfirm your social circle, or remake it, starting with the friends you’re relieved to see and the gaps in your chosen family you’ve been meaning to fill. Those associations — what Armistead Maupin calls your “logical family” — are at the heart of some intriguing new comics this week. 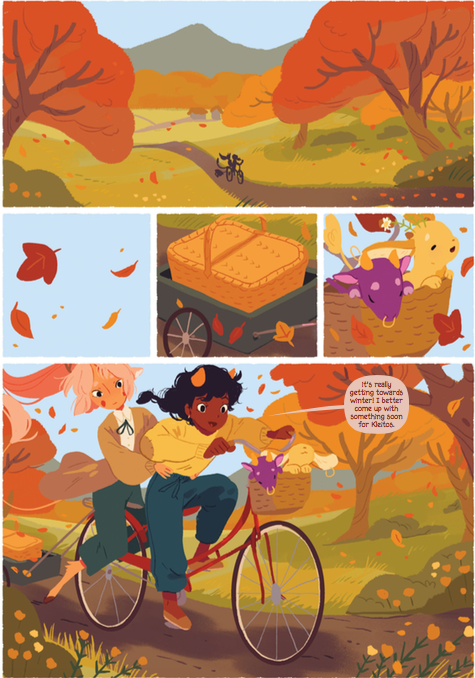 I would like to live in every single panel of this absolutely charming all-ages book. Though it’s the third in a series, it’s a perfectly fine entry-point (though I think you will appreciate reading from the beginning), with gorgeous colorful art illustrating a cozy story set in a small fantasy village. A young woman named Greta has been entrusted with a small dragon who is mourning the loss of its former companion, and Greta grows increasingly concerned about her inability to pull her charge out of its woeful state; meanwhile, her friend Minette has received a reminder of a difficult choice made in her past, one that she fears severed her tie to what she thought to be her purpose in life. The arrival of a master blacksmith seeking an apprentice, a chance encounter with some wise market vendors, and a former warrior’s acceptance of his own changing purpose help the young women to move past their doubts about whether they are both doing what is right. Moving, heartwarming, and served in a large hardcover format that does justice to it’s beautiful art. Suitable for reading out loud to young people, or for curling up with by oneself to bask in a tale of kind-hearted friendship. 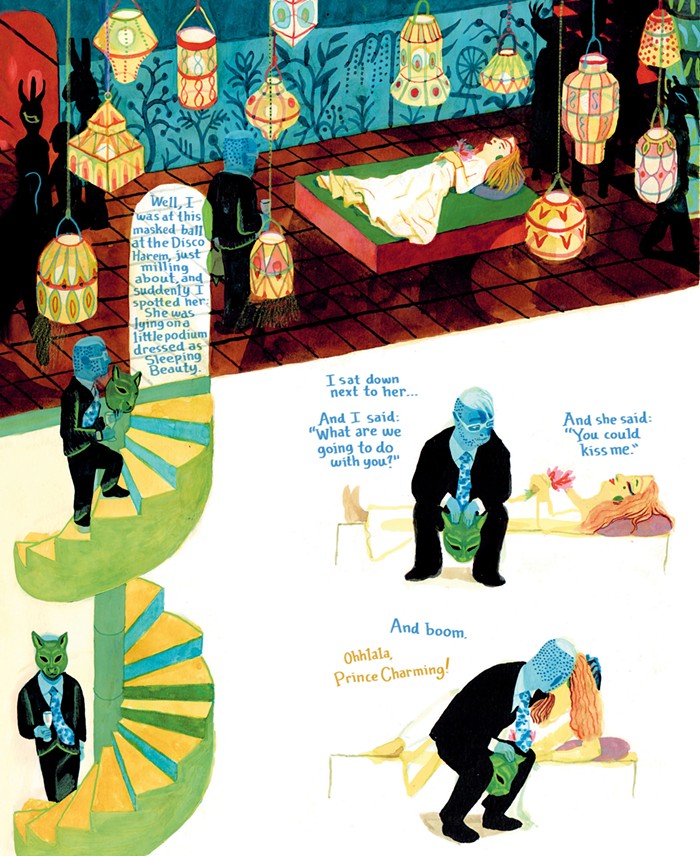 A strange watercolor dream, City of Belgium reminds me of the pointillism of Sundays in the Park with George in that the visual medium becomes a metaphor for the story itself. The book is sort of the watercolor equivalent of conversations: a smear of words and people, everything blending together. The book’s story meanders across one long strange night, in which three flawed losers struggle to make sense of the choices that led them to where they are, aimless and unsure about the meaning of life in general, let alone their own. A heavy volume with dense artwork, the book itself may take you days to consume; I suppose that’s appropriate, as it feels like a sort of endless wandering dream in which events blur together, eventually amounting to … well, it’s hard to say. Though our heroes (if they can be called that) are all searching for meaning, what they find in their long Jules-Feiffer-esque philosophical ramblings is ambiguous, like trying to trace the exact contours of blending watercolor puddles. Ultimately, there may be little more meaning to their struggle beyond persevering in the search for more meaning. 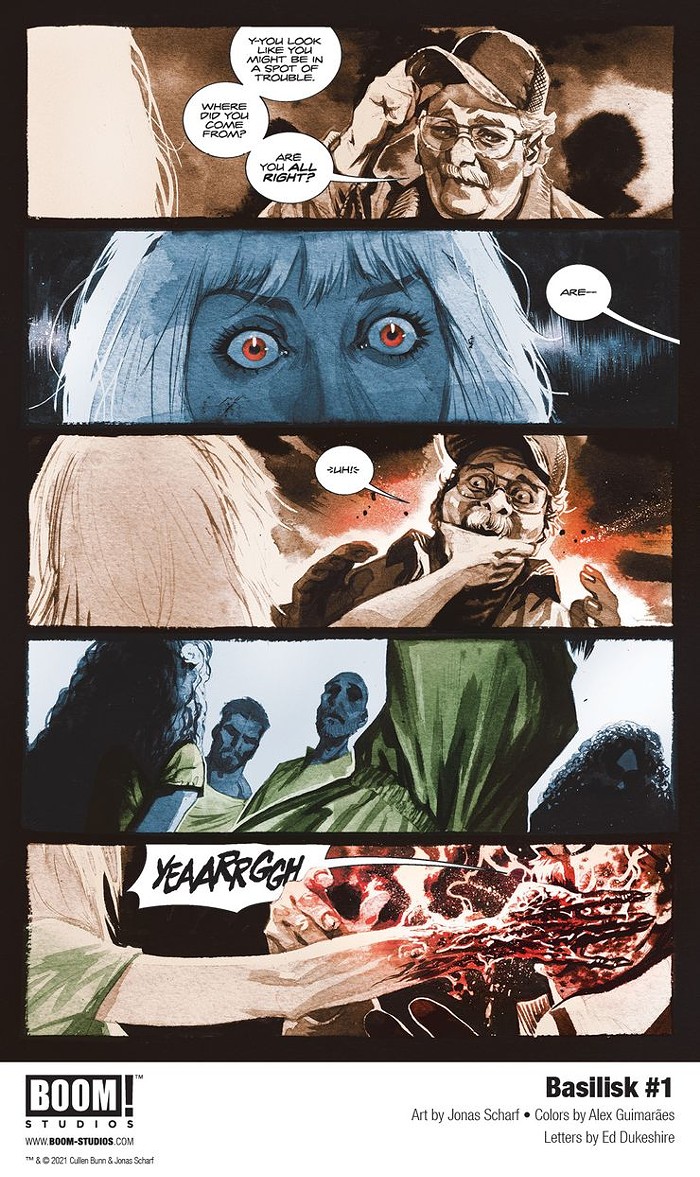 I am impatient for the Netflix adaptation of Sandman, due to come out sometime later this year (though who really knows, times being what they are) but while we wait, Basilisk is a worthy diversion. A sinister group of mythologically influenced beings called The Chimera stalk the land, looking a bit like outcasts from a post-apocalyptic ‘80s film and imbued with terrible deadly powers. One of their members, a woman who goes by the name of Basilisk, has fled the group; but now she is called to hunt them down, even as they, in turn, are hunting her. I’ve seen this book categorized as “horror,” but I don’t think that’s quite right even though it’s quite dark and occasionally features gory violence. I found it to be a more gothic drama in their vein of American Gods, a story of malevolent forces bound together as an unlikely — and sometimes unwilling — family. An intriguing mystery with a wonderful brooding heroine.

More promising titles this week: I love the concept of Out of Body, which is that a man who is near death must solve his own murder while having an out-of-body experience. The Worst Dudes is a naughty, raunchy gross-out about galactic bounty hunters, sort of Heavy Metal meets Guardians of the Galaxy. Joe Glass’s Pride Omnibus, featured in a recent interview, comes out this week with fabulous queer superheroes; and The Nice House on the Lake is an end-of-the-world story that focuses on a few people who have been spared from the apocalypse — but saved by whom, and for what purpose? Fans of teen boys with lots of feelings will appreciate the shonen-ai My Summer of You, in which soulful lads wonder if they’re in love (I’m currently watching Berserk, and the gaiety of the relationships is not dissimilar). And if you’d like to see superheroes dressed for a fancy occasion, the X-Men Hellfire Gala is currently on, with your favorite mutants attending a high-class ball.