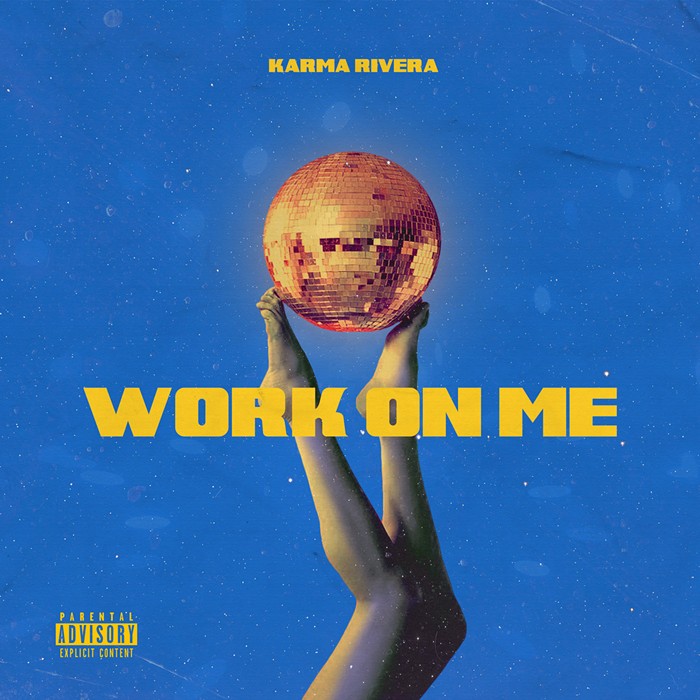 Colombian-American singer-songwriter Kali Uchis, who is bisexual, is one of this generation’s most stellar genre-defying artists—you never know what you’re going to get. Most recently, Uchis released an acoustic version of her song “Telepatia,” which appeared in its original form on her 2020 album Sin Miedo (del Amor y Otros Demonios). “Telepatia//acousic,” however, has just made her the first woman since 2012 to top the Hot Latin Charts without being accompanied by another artist. Sung in Spanglish, the new stripped down version is beautiful in its moody simplicity, accentuating Uchis’ naturally gorgeous voice, with soaring high notes at the song’s end.

“Work On Me,” Karma Rivera

While fans are still waiting on a proper full-length project from Portland-based rapper Karma Rivera, the artist recently dropped her second single of the year, following up her single “Kissy Face (Freestyle).” Her latest, “Work On Me,” clocks in at just over two minutes, and is definitely worth a listen. Over a reggaeton-inspired beat produced by Gio Español—a nod to Rivera’s own Afro-Latina heritage as part Puerto Rican—the artist raps saucy, confident lines in her verse like “if I get it now it might hurt me later/cause you know I got time like the percolator/ real bitch offline, no impersonator/and I always get mine and return the favor/it’s your time, no clown behavior/don’t hit my line if you ain’t talking major/ cause a bitch so proud of my hard labor/ and the hate so loud when you the star player.” Before and after Rivera’s only verse, Rivera welcomes anyone to put the “work on me” because she has nothing to hide and the hate doesn’t have an affect on her, because no one takes up space as a queer Black woman like she does: “No one gon taste like me/Or ride that face like me/Air out the place like me/Take up the space like me.” Listen on Bandcamp, where you can also pay the Chicago-born artist for her work.

Off the Yak, Young M.A

Not wanting to be pigeonholed as a female rapper or a queer rapper, Young M.A has turned the focus to her technical rap skills, deeper content, and her quickening release schedule. In late May, the Brooklyn rap star dropped a new full-length, Off the Yak, her latest release since her 2020 EP Red Flu, which followed up her 2019 debut Herstory in the Making. Off the Yak sees “OOOUUU” producer NY Bangers return for five songs, and the rapper shortens her tracklist for quality control (11 tracks, down from Herstory’s 21). She also revisits her personal history, flipping back and forth between inebriated partying anthems and seductive tracks like “Don Diva” featuring rapper/singer Rubi Rose, as well as some songs where Young M.A gets real and vulnerable—that’s where the project most obviously shines. A good example of that is on “Yak Thoughts,” in which Young M.A raps “I’m tryin’ to get back to the way I was/I’m tired of escapin’, I’m tired of the drugs/I be havin’ these relations but hidin’ my love/And instead of chasin’, I’m like, ‘That bitch is a dub’/Uh, feelin’ the need to keep my heart on freeze/Suffocatin’ my feelings, instead of lettin’ them breathe/ Knowin’ I’m hurtin’ inside but act like shit is a breeze/’Cause my heart is too heavy to wear that shit on my sleeve.”