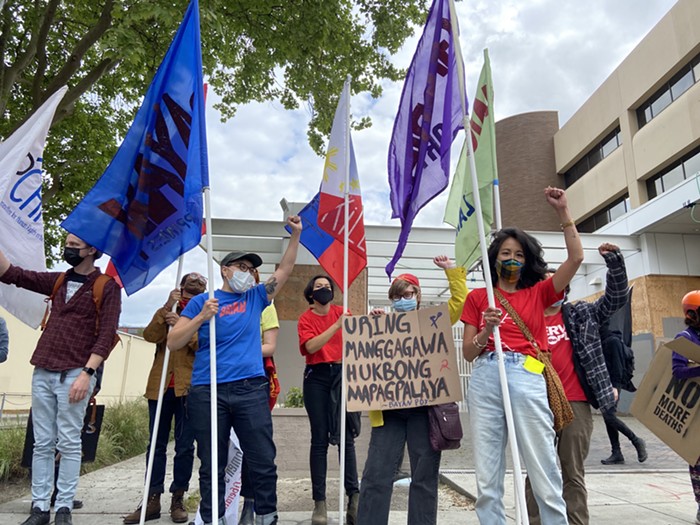 Members from Anakbayan, Migrante, and other migrant rights groups stand in front of the ICE building following a May Day march. Portland Mercury

It’s May Day 2021 and, per usual, Portlanders held serval events around the city focused on workers rights, the largest of which was a caravan for migrant workers’ rights that ended in front of the US Immigration and Customs Enforcement (ICE) building in Southwest Portland.

May Day, a nickname for May 1st, is International Workers Day, a holiday that is recognized by over 90 countries.

The migrant workers’ rights caravan and rally was led by International Migrants Alliance, a global alliance of organizations by and for migrants, refugees, and displaced peoples.

“International workers’ day is our people’s holiday,” said Adrian, an organizer with International Migrants Alliance Portland chapter, addressing a group of approximately 200 people gathered near OMSI for the 2 pm march. “It’s not a holiday declared by the state, it was declared by the people.”

After listening to opening remarks about solidarity and safety, and practicing chants, the group split into a car caravan and a marching group. The cars drove across the Hawthorne Bridge and stoped by the Multnomah County Justice Center while the group of 150 marchers walked over the Tilikum Bridge. The two groups met at the ICE building. Portland’s ICE building has become a regular hub for protests in recent years, most notably 2018’s Occupy ICE demonstrations in opposition to the Trump administration’s immigration policies. 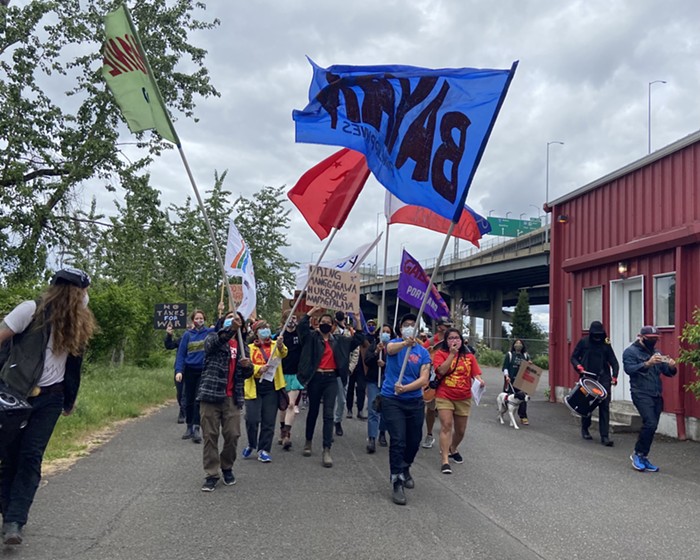 After meeting outside the ICE facility, march participants and organizers spoke to the gathered crowd. Several speakers condemned US imperialism, citing it as the catalyst for economic destabilization in countries that often drives migration to the U.S. where those migrants then suffer under poor working conditions.

“We cannot talk about [migrant] workers without talking about the conditions that have led them to their forced migration,” said a Somali student and representative from Hurriyyah Collective, an anti-imperialist muslim collective. “I am not supposed to be here, but imperialism has made it impossible for to be where I am from. But while I am here, I am with you, heart to heart, shoulder to shoulder, hand in hand.”

During the initial speeches, approximately 20 officers with the US Department of Homeland Security (DHS) dressed in riot gear formed a line across the street from the group. Several people in “black bloc”—a term for wearing all black clothing that covers any identifying features—formed a line opposite the officers, heckling them and squeaking toy pigs. After 15 minutes, the DHS agents retreated behind the ICE building gate.

Today’s May Day migrant worker rights rally has arrived at the ICE facility. Speakers are talking about imperialism, Biden’s migration policies, and migrant rights. DHS officers lined the street before moving back towards the ICE driveway. pic.twitter.com/09xdrYqIZV
— Isabella Garcia (@isabellaaliciaa) May 1, 2021

Jed, a member of Filipino youth organization Anakbayan, noted that the standoff with DHS agents had been tense and led the crowd in a deep breath before speaking about his experience coming from a long lineage of migrant workers.

“I am proud to be working class,” said Jed. “We are dignified and we have respect. We respect our rights to be treated as human beings and not as commodities. We want to benefit from the fruits of our labor. We don’t want to be wealthy like the capitalist class that exploit us. We want to live in peace. We want to live in a society where we aren’t exploited.”

The crowd also heard from members of Migrante, a Filipino migrants’ rights organization, and the Center for Study & Preservation of Palestine.

A representative from Portland Democratic Socialists of America (DSA) talked about the Protecting the Right to Organize (PRO) Act, a bill that would protect workers from being penalized for unionizing that is currently in the US Senate after passing the House in March. The Portland DSA also held a rally earlier in the day at Holladay Park, attracting a group of approximately 50 people to learn about the PRO Act and march to Senator Ron Wyden’s office, urging him to support the bill.

The speeches at ICE ended around 5:30 pm, but the day’s planned May Day activities aren’t over. This evening, other activists plan on demonstrating outside of the ICE building and in Southwest Portland’s Shemanski Park.