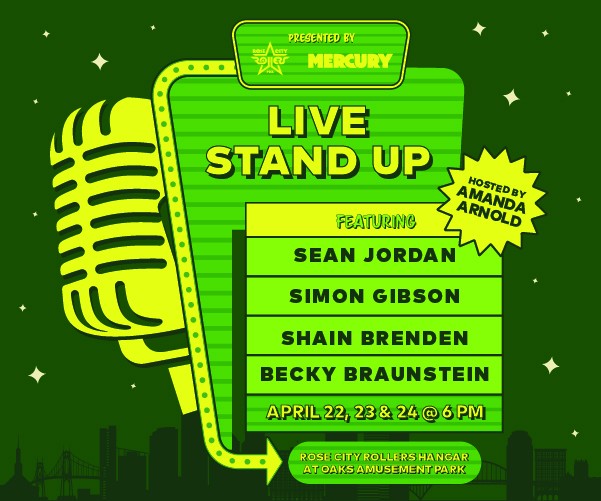 Live comedy is BACK, laugh-lovers! And in a safe, outdoor venue! Coming at ya this week on April 22, 23, and 24, don’t miss the Rose City Rollers and Mercury‘s LIVE OUTDOOR COMEDY SPECTACULAR, featuring a hot-shit lineup of excellent local and nationally recognized comedians, including…

• BECKY BRAUNSTEIN (Mercury “Genius of Comedy,” Unprotected Sets on EPIX, Chad on TBS, Trinkets on Netflix, and Season 3 of Shrill on Hulu)

Your $75 ticket reserves one of our socially distanced, outdoor tables—good for up to FOUR attendees per table. Plus, a beer garden will be on site along with food service available from our friends at Killer Burger!

Doors open at 6 pm, show starts at 7 pm. Don’t miss this great lineup of terrific comedy coming at you THIS THURSDAY THROUGH SATURDAY, April 22, 23, and 24! It’s the OUTDOOR LIVE COMEDY SPECTACULAR brought to you by the Rose City Rollers and your pals at the Mercury. So what are you waiting for… GET THOSE TICKETS NOW!