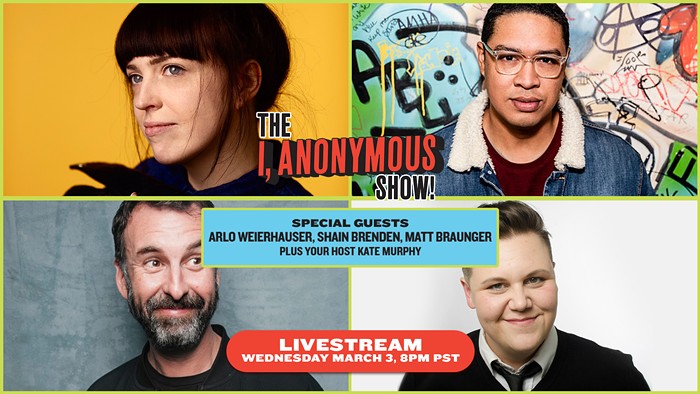 HEAR YE! HEAR YE! Do you miss live comedy? (“YES!”) Do you want to support the Mercury AND laugh your buttz off in the process? (“YES! YES!”) Then the upcoming Wednesday, March 3, I, Anonymous Show (Livestream Edition) is for you! Here’s how it works: We get the funniest local and national comedians to riff and heckle the wildest, jaw-droppingly wrong, and uncensored I, Anonymous submissions from the famous Mercury column, and in return you get a jam-packed evening of laughs!

The previous I, Anonymous Shows have been wildly funny and entertaining (and included some fun audience participation!), so you truly do not want to miss this one! Joining your delightful host Kate Murphy (a Mercury “Undisputable Genius of Comedy”) will be the following murderers’ row of hilarious comedians:

Dang, folks! That is one helluva lineup right there! So if you need some guaranteed laughs, the I, Anonymous Show is the cure you’ve been looking for. GET YOUR TICKETS NOW for the livestream I, Anonymous Show—coming at ya WEDNESDAY, MARCH 3, at 8 pm! IT’S A LAFF RIOT WE’RE TELLING YA!