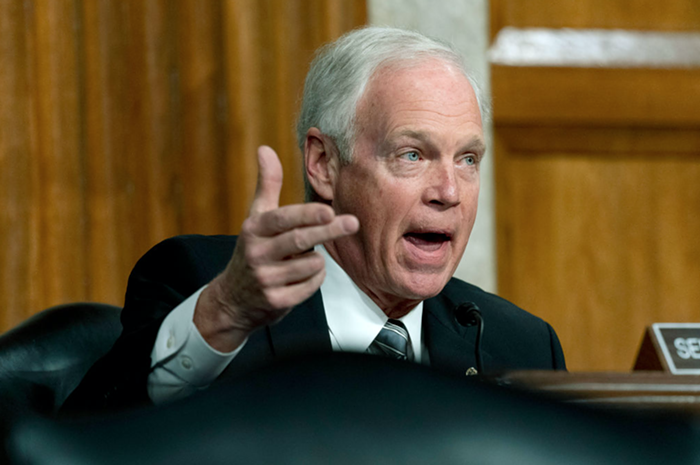 Onlookers looked on in horror at today’s Capitol riot hearings as a flood of bullshit poured out of Sen. Ron Johnson’s mouth. Pool / Getty Images

• A communication breakdown between the Portland mayor and city commissioner has the residents of Hazelnut Grove, the tiny house village that’s currently home to 17 formerly houseless people, wondering when or if they’re going to be kicked out. Our Alex Zielinski has more!

“Part of me wonders if the flip-flopping is some kind of tactic to demoralize us,” said one Hazelnut Grove resident. “Or maybe it should be encouraging to see some uncertainty… It shows they’re really thinking it over.” https://t.co/mIq1UlfWDc

• The city of Portland is ready to pay $2 million to the family of Quanice Hayes, the unarmed Black teen who was killed by Portland Police in 2017 while trying to surrender. The large payout follows a verdict from a grand jury who—YOU GUESSED IT—refused to find the officer guilty. (Reminder: That’s your tax dollars that are going to cover a police department who refuses to hold their officers accountable.)

• Governor Brown has moved 11 more counties into lower risk categories, including Clackamas and Washington counties which have been moved from “high risk” to “moderate risk.” For now, Multnomah County is sticking in the “high risk” designation. 🙁

• A Salem man is suing the Mormon church, saying he was sexually assaulted by a youth leader who was allowed to continue working there even after he was convicted of molesting another boy.

• A new Mercury reader wrote in to complain about an article that contained (prepare to grasp your pearls) the word “fuck.” The Mercury‘s fucking editor-in-fucking-chief Wm. Steven Humphrey (hey, that’s me!) fucking responded to that fucking criticism, you better fucking believe it.

• Capitol police officers and officials testified in front of Congress today about the January 6 domestic terrorist attack on the nation’s Capitol, and (surprise, surprise) didn’t take any responsibility for their actions, instead blaming faulty intelligence and even each other. (RIP the eternal bond of police brotherhood.)

• Also in today’s Capitol riot hearings, instead of asking questions, eternally corrupt Republican Sen. Ron Johnson spent his time spewing fake conspiracy theories that Antifa was behind the domestic terrorist attack instead of Trump’s cavalcade of morons, while also blaming the police who he accused of sparking the riot. In other words, he was right on brand.

Half a million Americans have died of #COVID19 and GOP legislators decided to mock the requirement to wear masks in the state house. pic.twitter.com/xrPORVt8FY

• A New York grand jury has refused to charge the Rochester police officers for their part in the suffocation death of Daniel Prude, a Black man in mental health crisis who was pinned naked to the street with a “spit hood” over his head. If this “letting the cops skate” scenario sounds familiar, that’s because it happens almost every fucking time—but by all means, tell me again about how it’s a bad idea to defund the police.

• More positive COVID-19 news: Vaccine makers, Pfizer and Moderna, announced they are significantly ramping up production to the point where they think most Americans can get vaccinated by summer! (This is good news, because I don’t have a mask that matches my thong.)

• Golfer Tiger Woods was seriously injured in a roll-over crash today, and is in surgery for major leg injuries. At this point, the police do not think he was impaired at the time of the crash.

• After the colossal failure of their power grid, four board members of the Electric Reliability Council of Texas are planning to resign their positions. (Not holding my breath while waiting to see if Ted Cruz and Gov. Abbott joins them!)

Republican-backed legislation to make it harder to vote in Georgia has passed the state Senate.

“Let’s make no mistake [as to what] this bill is about: The election did not turn out the way you wanted it to.”https://t.co/UmaKd6ASRJ

• Get ready to party HARD in the third installment of the Mercury Music Series, with a livestream concert from super fun Portland rapper/singer/producer FOUNTAINE, coming at ya on March 11! Snap up those tix, babies!

• And now… THE WEATHER REPORT: Finally a legit mostly sunny day tomorrow with a high around 49.

• And finally, okay, I’m sad about Daft Punk breaking up. But maybe this guy’s not a bad replacement?

DAFT PUNK FOR EVER 🍊🥕 pic.twitter.com/M6oCHTejpD