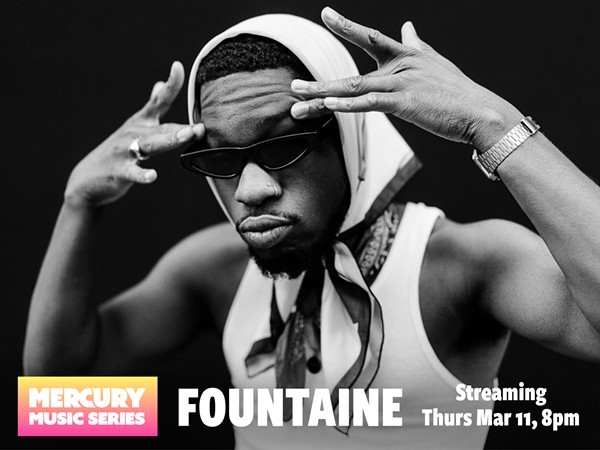 If you miss the live music experience, listen up: We’re thrilled to announce that our third edition of the Mercury Music Series will showcase the solo talents of the multi-talented Fountaine.

In case you missed the first two installments, the Mercury Music Series is a new virtual streaming showcase featuring locally-based artists, providing a rare chance to experience concerts (in some form) during the continuing pandemic. The series, curated by yours truly, will also provide our featured Portland-based artists an opportunity to earn cash from performing, while simultaneously raising much needed funds for the Mercury. And because we know that times are tough, ticket prices are available on a sliding scale. Through your support, the Merc hopes to continue producing this series until live venues are able to open again, while also supporting artists during this difficult time.

This is why we’re extremely excited to feature rapper/singer/producer Fountaine (AKA Mikey Fountaine), who has established himself as one of Portland hip-hop’s most integral and versatile figures.

Back in 2016, the Portland-raised emcee cut his teeth in acting, appearing as the protagonist in X-RAY, a ten episode web series by Seena Haddad that’s focused on Portland’s buzzing hip-hop scene. Known for his lyrics laced with animé references, the majority of Fountaine’s earlier catalog, like 2016’s Blak Sushi and Wisteria, have been moved to Bandcamp for fans to enjoy. On 2017’s excellent H.F.I.L. (Hell For Infinite Losers), Fountaine put his foot in tracks like the groovy throwback “Dressed to Kill,” as well as the uptempo and rock-infused “I Do,” and hydro-powered opening track “Scorpio.” In 2020 the rapper/producer put out a couple solid singles: the ever-relatable “I’m Trying to Get My Stimulus Check,” followed by “South of Nowhere Funk,” which comes with a short-film music video that sees the rapper tap back into his acting skills.

Whether performing with frequent collaborators or on his own, Fountaine is beloved in his hometown for his charisma and infectious energy during sets that get the crowd jumping and feeling good. Amongst Fountaine’s other superpowers are his excellent comedic timing and phenomenal dance moves, which make it even more of a joy to watch him take the stage; his nearly one-hour set at the empty Polaris Hall for the Mercury Music Series is no exception.

Watch the AMAZING teaser video below and then get your tickets now for the Fountaine show, coming at you on Thursday, March 11 at 8 pm!