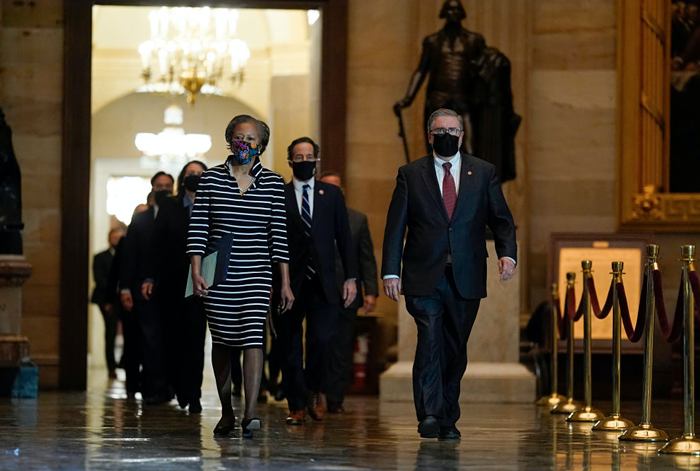 House delivers article of impeachment for second time (so they should know their way by now). Pool / Getty Images

• The inspector general for the Justice Department is launching an investigation into top DOJ officials to ascertain whether they made any attempts to overturn the election for their dark lord and master Donald Trump (and it appears they almost certainly did).

• Meanwhile, as the article of impeachment makes its slooooow walk from the House to the Senate, it was announced that their longest-serving Democrat, Sen. Patrick Leahy, will preside over the trial instead of Chief Justice Roberts (who would’ve been in charge had Trump still been in office).

There it is — House impeachment managers deliver article of impeachment against Donald Trump to the Senate, formally triggering a trial. pic.twitter.com/S2pxwq6nT7

• Busy Bee Biden has had another very busy day kicking ass and taking names that includes (but is not limited to) the following: Pushing to get Harriet Tubman on the $20 bill! (A full-throated “fuck you” to Trump.) Overturning the military’s transgender ban! (Again… eff YOU, Trump!) Signed a “Buy American” executive order! (A much better plan than fucking Trump’s.) Replaces Trump’s shady doc with a new White House physician! (No shade here… fuck you, Trump!) Replaced Trump’s ZERO White House pets with two very good boys, Champ & Major! (Awww… super cute. Also Trump can go fuck himself.)

• Health officials in Minnesota announced the first case of the highly transmissible COVID variant from Brazil has arrived in their state (and, by extension, the US). It is one of three variants that has been of concern to global scientists.

• Tough news for pants-tugging Trump goon Rudy Ghouliani who is finding himself on the receiving end of an… oof!… $1.3 billion defamation suit from Dominion Voting Systems who is accusing the loser lawyer of spreading extensive (and nonsensical) lies that they had rigged the election. (Hope he can find a better lawyer than he is!)

• Dems have another good shot at beefing up the Senate in 2022, as Republican Ohio Senator Rob Portman has announced he will not be seeking re-election, due to a “lack of bipartisanship.” (That’s one crybaby down, and 49 crybabies to go!)

• Good Supremes News: Abortion advocates cheered the Supreme Court swatting down a lower court ruling that banned all abortions in Texas during the pandemic. Bad Supremes News: They also knocked down challenges to Trump’s shady business dealings while in office, which were ruled to not be a violation of the Constitution.

• Today in Southeast Portland, the driver of a car was arrested for running over at least six people within a 20-block stretch, according to police. This scary story is still developing.

• Last night, following a dinner with soon-to-be co-worker and former Mayor Sam Adams, Mayor Ted Wheeler pepper sprayed a member of the public who he says confronted him and was shooting video. Our Alex Zielinski has more!

Mayor Wheeler pepper sprayed a man who confronted him outside a restaurant yesterday.

• In another Mayor Wheeler story (in which no one gets pepper sprayed), the mayor has appointed longtime economic development vet Bobby Lee to be his new chief of staff. More on that from our Alex Zielinski and Blair Stenvick.

• GOOD NEWS/NOT-SO-GOOD NEWS: The Oregon Health Authority reported 435 new positive COVID cases and two additional deaths today, the lowest numbers since October. However, they also reported the third case of the new COVID variant strain which is thought to be far more contagious.

If this bill succeeds, Oregon will be only the 3rd state where incarcerated persons can exercise the right to vote. The progress to enfranchise these citizens & include their voices in our electorate has been slow-going, but, so necessary. #FreeTheVote https://t.co/TDNdmtNRow

• More progressive groups and labor unions are piling on to demand the expulsion of Republican Oregon Rep. Mike Nearman, who was caught red-handed letting violent, armed Trump chuds into the statehouse during a special legislative session. By all means, let the pile-ons continue!

• In other accusations of political bad behavior, Democratic Rep. Diego Hernandez has been accused of creating a hostile work environment, which includes reports of “controlling and verbally abusive” behavior from more than one female coworker.

• News of the YIKES: A Tacoma, WA police officer in his vehicle plowed through a group of street race observers on Saturday night, sending one person to the hospital with injuries.

• Today in headlines you have to read three times in order to figure out what the fuck is going on: “Bat baby being hand-reared using upside-down sock-mom at Oregon Zoo.” Cute bat, tho.

• Miss the live concert-going experience? Then DO NOT MISS the new Mercury Music Series, featuring livestream performances by your fave Portland artists—debuting with the fantastic BLOSSOM! Coming at you THIS THURSDAY January 28!

• If you need “funny”: There are tons of laughs and some hilarious nationally recognized comedians on deck for the next I, Anonymous Show, streaming into your eyes on Wednesday, February 3!

• THE WEATHER REPORT: A chance of showers tomorrow and SNOW in the late evening with a high of 39!

• And finally, turn up the volume and get ready for a jaw-dropper, folks! Because your day won’t get any better than this.

This is what #blackexcellence looks like. @DennisNia does it again! 🔥