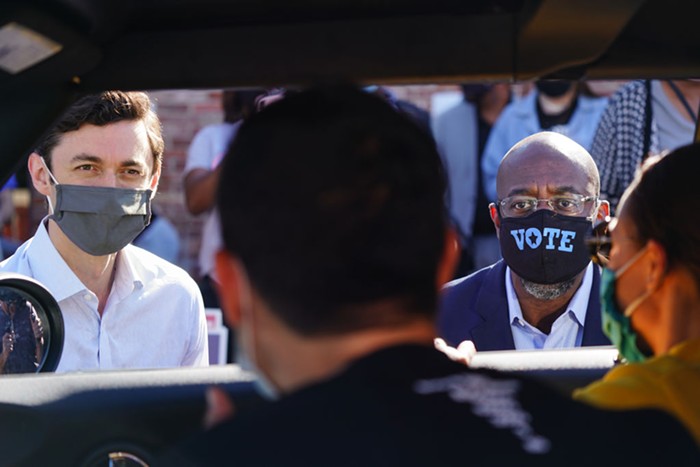 Warnock and Ossoff’s support for cannabis could prove pivotal in the Senate, as more opportunities for the country to reverse our backward stance on the tiny green plant make their way through Congress. Elijah Nouvelage/Getty

If you can believe it, the contentious January 5 runoff in Georgia is less than a week away. It’s an election that will determine which party has the power in the Senate.

Republicans have flung a lot of misinformation in this race, so let’s briefly dig into where Democratic challengers Rev. Raphael Warnock and Jon Ossoff stand on essential issues like health care, criminal justice reform, reproductive rights, climate, and that very essential topic of cannabis legalization.

Despite what incumbent Sens. Loeffler and Perdue want voters to believe, neither Ossoff nor Warnock supports a “Medicare for All” plan. Ossoff went as far as to say that he will “defend every Georgian’s rights to choose between private and public insurance.” While Ossoff and Warnock recently accepted progressive kingmaker Bernie Sanders’ endorsement—a new frontier for the moderate Democrats—don’t expect either Georgian to cram socialist health care down your throat. Drats.

Warnock has called health care a “human right” and says he wants to improve the Affordable Care Act, drive down insurance costs, and make sure everyone is covered. In an interview with Atlanta Magazine, the reverend characterized expanding access to health care as his goal on day one in the Senate. He says he wants to expand Medicaid in Georgia, one of 12 states not to have done so.

Warnock’s brother was recently released from being imprisoned for a nonviolent drug offense, and Warnock has made criminal justice reform a core part of his campaign. He supports ending privatized prisons, reforming the bail system, and ending mass incarceration. He’s backed the creation of a federal body to “probe officer use-of-force misconduct” and says he would support legislation that would allow the formerly incarcerated to transition back into society more easily.

Though both Loeffler and Perdue have claimed that their opponents want to defund the police, Warnock and Ossoff repeatedly have said they are against the idea. Warnock went as far as creating a cop-filled ad to show his support for the police force. Ossoff told WSB radio that the answer isn’t to defund the police but to reform and demilitarize. Loeffler and Perdue routinely make both men sound much cooler than they actually are.

In the Georgia runoff, Republicans have attacked Democrat Raphael Warnock as an anti-cop radical who wants to defund the police.

I am a pro-choice pastor.
— Reverend Raphael Warnock (@ReverendWarnock) December 9, 2020

Former sexual health educator Rev. Warnock describes himself as a “pro-choice pastor,” a fact that conservatives have blasted time after time during this election season. Endorsed by Planned Parenthood Action Fund and NARAL, Warnock believes in a “woman’s right to choose” and frequently characterizes that right as a decision between a woman and her doctor—not the government. He’s also pledged to stop partisan attacks on health care providers like Planned Parenthood, defend Roe v. Wade, and supports access to affordable reproductive care.

NARAL and Planned Parenthood have similarly endorsed Ossoff, who vows to “only vote to confirm federal judges who pledge to uphold Roe v. Wade.”

Warnock supports decriminalizing cannabis, linking it to the fight for bail reform which disproportionately impacts Black, Latinx, and poor people. In one sermon, Warnock said it’s “not enough” to only decriminalize cannabis. “Somebody’s gotta open up the jails and let our children go.” Loeffler, of course, ran with this line (sans context) during their debate earlier this month, but was called out on it.

Ossoff is also pro (regulated) weed. “I’m not just for decriminalization, I’m for outright legalization of cannabis nationally,” said Ossoff in a July interview with Atlanta’s DJ Scream. “I think that the prohibition of this substance is irrational.” He also said he’s for expunging the records of people who have nonviolent weed-related offenses.

Warnock and Ossoff’s support for cannabis could prove pivotal in the Senate, as more opportunities for the country to reverse our backward stance on the tiny green plant make their way through Congress.

While both Ossoff and Warnock say they support rejoining the Paris Climate Accords, investing in clean energy, and reversing the Trump administration’s detrimental rollbacks on environmental protections, they emphatically do not support the progressive-approved Green New Deal.

Ossoff has gone on the record frequently about his lack of support for the non-binding resolution. In an interview with the New York Times, Ossoff says he commends Sen. Ed Markey and Rep. Alexandria Ocasio-Cortez for linking environmental and infrastructure policy, but he does not believe that “fighting climate change requires the abolition of the private health insurance market.” I could dedicate an entire post to unpacking that quote. Another time, maybe.

While it would be comforting to have two more people elected to office that believe in climate change, don’t expect a Democrat-controlled Senate to pass Green New Deal legislation anytime soon.