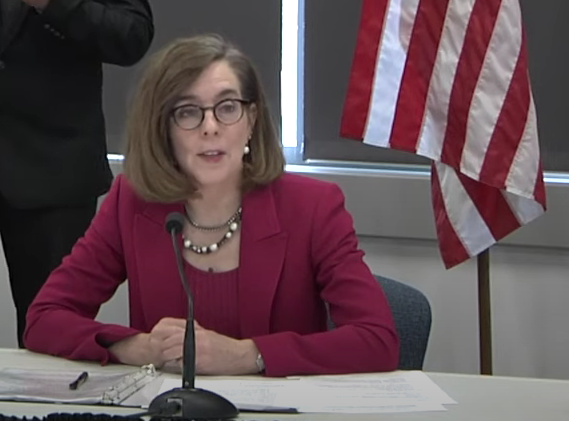 • Fearing potential violence on election night, Gov. Kate Brown has put the Oregon State Troopers and Multnomah County Sheriff’s Office in charge of policing Portland (with the National Guard on standby), aaaaaaand you guessed it, physically and environmentally dangerous CS tear gas is definitely on the table, despite the bans and moral concerns against it. Our Alex Zielinski has more.

A federal judge is restricting federal officers from engaging in crowd control enforcement more than one square block from the Mark O. Hatfield United States Courthouse, under an order filed Monday afternoon. https://t.co/40vhhXR88i

• In Lane County, there were reports over the weekend of armed domestic terrorists intimidating and turning people away from a ballot box drop off point.

• By the way, a little bird told me that you are “very” interested in tomorrow’s ELECTION RESULTS. That’s why you should join the Mercury Election Strike Force™ as we bring you all the latest, most up-to-the-minute coverage on all the local and national races! FOLLOW US HERE.

• Oregon now has an average of at least 500 COVID cases per day, with the OHA reporting 557 new infections today and one additional death. Meanwhile, as Oregon’s coronavirus cases surge upwards, health officials are concerned that state hospitals will reach capacity by mid-December.

OHA released today’s numbers early, so you get a two-fer on Oregon #coronavirus trends. 557 new cases, 1 new death. Only 1,763 tests released for an unheard-of 31.6% case positivity & 199 cases in Multnomah County. That hints there’s a serious outbreak in Multnomah. 5 straight… pic.twitter.com/GZGZ76vF1q

• Due to COVID-19 constraints, locations that local officials used to rely on to offer extra shelter during the winter months are no longer available. So they’re asking for the public to help find space for 300 additional emergency shelter beds. Our Alex Zielinski has the details.

• In case you somehow missed it, you have only one more day to cast your vote, and more than 95 million Americans have already beat you to it. (Need some help? Check out the Mercury‘s Endorsement Cheat Sheet!)

If the contest is close in those 6 key states, it may be hard to know who won until their mail ballots are fully counted.

Here’s a look at how long that may take: https://t.co/M2XWRwSjSO

• DENIED: For the second time, a judge has rejected a Texas GOP request to invalidate nearly 127,000 votes cast at drive-thru polling places out of a very real fear their state could turn blue.

• With most polls unwaveringly predicting Biden in the lead, Trump is resorting to his old stand-by tactic whenever he loses… take the winners (in this case, the United States voters) to court.

• And about those polls: While they were certainly off in 2016, there’s an ABUNDANCE of reasons to have strong confidence that Biden’s lead is going to hold going into election day. Here’s a good roundup featuring all the latest polls.

• ALSO DENIED: A federal judge in Chicago has slapped down a Trump attempt to deny green cards to immigrants who use food stamps or other public benefits.

• As COVID cases across the nation continue to explode, Trump is (of course) threatening to fire his top infectious disease expert, Dr. Anthony Fauci, after the election. (Technically, he can’t do that because Fauci is a federal employee and not an appointee… so ha-ha-ha… DENIED.)

‘Trump has for weeks told advisers that he expects to face intensifying scrutiny from prosecutors if he loses. He is concerned not only about existing investigations in New York, but the potential for new federal probes as well’ https://t.co/F8hatWsGBm

• In Vienna, one person is dead and several are injured during a shooting spree by multiple gunmen in what authorities are calling a “terror attack.”

• Pour one out for Nikki McKibben, the former, first season American Idol contestant who came in third behind Kelly and Justin, and has died at the age of 42.

• The WEATHER REPORT: A showery week lies ahead starting tomorrow with a high of 56!

• And finally… “and the band played on.”