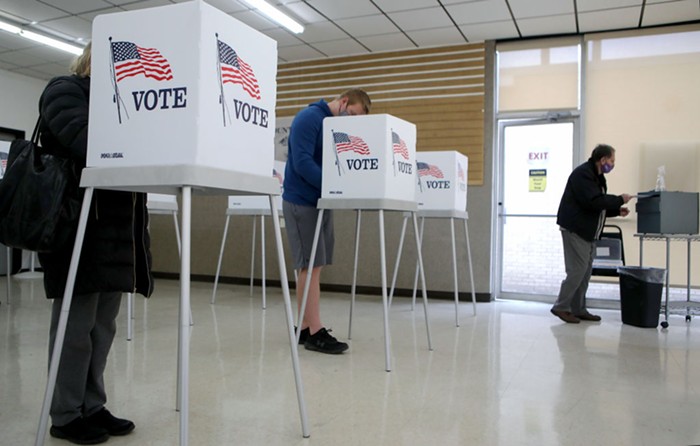 • Hundreds of Portlanders spoke out at a six-hour Portland City Council meeting about fall budget amendments yesterday—in particular a potential $18 million cut from the Portland Police Bureau. Commissioner Jo Ann Hardesty introduced the amendment that was supported by Commissioner Chloe Eudaly, though the vote was delayed for another week, thanks to stalling from Mayor Ted Wheeler (who’s against it) and new Commissioner Dan Ryan. Our Alex Zielinski has this interesting roundup of details.

• In reaction to the Mayor’s refusal to cut any deeper into the police budget and a general “lack of vision and leadership,” Commissioner Jo Ann Hardesty announced this afternoon that she will be endorsing Wheeler’s primary competitor, Sarah Iannarone, for mayor. Our Blair Stenvick has more.

• Also yesterday, city council voted in favor of a resolution to restrict the 56 PPB officers who were federally deputized last month. Now these officers will only be allowed to enforce local and state laws, while not taking any direction from federal agents (who always lean toward authoritarianism and violence) when policing protests.

• Portland Police will be teaming up with tear gas happy state troopers and Multnomah County Sheriff’s Department to “keep the peace” (HAHAHAHAHAHAAAAA!) from election day to well into November. They will also be patrolling ballot boxes to protect voters against intimidation, even though the police are the primary reason many communities feel intimidated.

• Journalism “inside baseball” news: Local journos were told to stop taping and taking pictures of a public meeting between protesters and new Portland commish Dan Ryan that took place outside his home and was on the topic of chopping the police budget. On one hand: If they wanted the meeting to be private, they could’ve taken it to a private place. On the other: Well… the way I see it, there is no “other”—either you are in favor of transparency on issues that affect all Portlanders or ya ain’t. (Dear protesters, please don’t TP my house.)

• Today the US hit another depressing milestone: As of today, the country has passed the 9 million mark of COVID infections, and there’s no sign of it slowing. Which is impossible, right? I mean, Trump definitely said we’ve “turned the corner!”

• While there will certainly be many yahoos who disagree, public health experts are starting to line up behind Biden’s idea of a “national mask mandate,” as hard as that might be to accomplish.

• Early voting in Texas has broken previous records, and Dems are starting to smell the possibility of a flip to blue in the state. The same goes for Biden’s chances in the historically Republican state of Georgia, as well as Democratic senate hopefuls who are also picking up steam there.

The third and final debate in the Georgia Senate race between Sen. David Perdue and Jon Ossoff has been canceled after Perdue pulled out.https://t.co/OUyt8vGbjJ
— Kyle Griffin (@kylegriffin1) October 29, 2020

• Meanwhile, Biden and Trump held competing rallies today in Florida, and according to a new NBC/Marist poll, Biden is holding a small four point lead in the traditionally red state.

• More cautiously positive news: The Supreme Court is allowing two battleground states, Pennsylvania and North Carolina, to extend deadlines for mail-in ballots. (Which is probably making Trump scream, “Waitasecond… THIS IS NOT THE COURT I PAID FOR!!”)

• Georgia Sen. Kelly Loeffler is 100 percent behind everything President Trump has done or said, OKAY??!? But when asked if that includes him bragging about sexual assault on the Access Hollywood bus in 2016, she suddenly has no memory of that ever happening!

• Also currently living on a totally different planet, Republican Sen. Susan Collins who told a debate audience, “I do not believe systemic racism is a problem in the state of Maine.” (And yes, she is a white person in Maine.)

Dossier on Hunter Biden is the work of a fake “intelligence firm” called Typhoon Investigations, according to researchers and public documents. The author of the report, self-identified Swiss security analyst Martin Aspen, is a GANS-fabricated identity. https://t.co/eLUoKW4RK5
— Justin Hendrix (@justinhendrix) October 29, 2020

• In these terrifying times, don’t you need a good, wholesome scare? Get your tickets now for SLAY—the short, eight-minute-or-less HORROR film festival from the makers of HUMP! Streaming right now through the 31st!

• The WEATHER REPORT: Expect some afternoon showers tomorrow with a high of 57!

• And finally, I hope you rest as peacefully tonight as this rice bear cuddling beneath an omelet blanket.

you deserve to see this 💛 hope you have a great day. pic.twitter.com/NH5rPrWxsa
— therapist friend (@gaialect) October 28, 2020