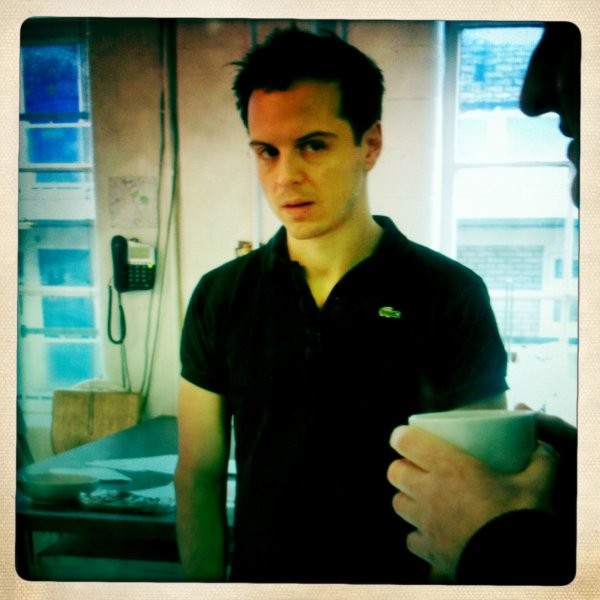 Sea Wall
While Phoebe Waller-Bridge was deservedly and rightfully showered with awards for Fleabag season two, it can be argued (and she’s made this case herself) that if it wasn’t for Andrew Scott as Hot Priest, the season would have never happened at all. But before he was Hot Priest (and before he was Moriarty in the BBC’s Sherlock, before that show became flaming crap), he was the guy that playwright Simon Stephens wrote Sea Wall for in 2008. The 30-minute play was then recorded in 2012 after a theatrical run in 2012, and is now being made available to stream, for free on YouTube, until May 18. And even if this play—and Scott’s performance in it—weren’t described by multiple critics as “a life-changing experience,” the fact it’s an opportunity to literally spend a half-hour in a locked room with Hot Priest should be enough to get you to click it.

The Mystery Box Show
The coronavirus has us all cooped up indoors, but good true-sex storytelling can set you free, and that’s why The Mystery Box Show is taking their long-running, successful local storytelling show to YouTube tonight at 6:30 pm, with tales from Jason Rouse, Heather Marcus, James Cox, and Reba Sparrow. The stream isn’t behind any paywalls either, but if you’re feeling generous, there are donation and Patreon links to click while you watch.

Beyond Now: A Virtual Fundraiser for PICA
PICA is an absolute good for this community, and for anyone who values art in all its forms, and wants to make sure they’re supporting creative acts and local arts. The “Beyond Now” fundraiser features over 30 artists sharing new performance, video, and visual works, as well as conversations with creators, dance parties, and more, and the three-day online gala that started on Thursday culminates in today’s special livestream starting at 5pm, hosted by Carlos the Rollerblader, and featuring new performance works by artists including Allie Hankins and Ahamefule J. Oluo; video works by Ryan Trecartin and Lizzie Fitch and more; guest appearances by artistic luminaries such as Linda Austin, Miranda July, and Eiko Otake; and a silent auction featuring one-of-a-kind works. Pay the stream a visit, and if you can, literally pay the stream to help keep the arts alive in Portland.

Block by Blockwest
Who could have predicted that in 2020, a global pandemic would have closed down most of the economy and relegated most of the world’s citizens into self-quarantine? And further, who would have predicted that festival concert season would not only not slow down, but would instead move online? And then, THEN: Who would have predicted the number one place to host these online mega-concerts would be the video game Minecraft? And yet, here we are. In 2020. Staying home, staying safe, and starting at noon, raising money for COVID relief by donating during performances from Pussy Riot, Sir Sly, Hunny, Cherry Glazerr, The Wrecks, The Polar Boys, and many, many more.

Tropitaal: A Desi-Latino Soundclash
For seven years now, DJ Anjali & The Kid have been commandeering the Tropitaal Desi-Latino Soundclash to the delight of knowing Portland audiences. The fact people can’t go out to the club won’t stop that seventh birthday party from going off in grand style, as they’ve been livestreaming DJ sets since the early days of the lockdown, and they’re bringing all their formidable dance powers to this party on Twitch.tv, tonight at 8 pm.

Muppet Guys Talking: A Special Conversation to Honor Jim Henson
The stars of 2017’s documentary/conversation/storytelling session Muppet Guys Talking (and by “stars,” I mean Muppet legends like Frank Oz, Dave Goelz, Jerry Nelson, Fran Brill, and Bill Baretta) are reuniting today at 1pm for a livestream to pay tribute to Jim Henson and raise funds in his name to help frontline workers fighting the spread of COVID-19. Attendance is free, but everyone who pre-registers to attend the event will be asked to make a donation to a selected coronavirus-related cause. Also, if you haven’t yet watched Muppet Guys Talking, why not rectify that oversight while you’re waiting for the charity stream to start. These are the folks who brought Gonzo, Piggy, Snuffleupagus, Pepe the Prawn, Fozzie, Bobo, Boober Fraggle, and so many more to life. Don’t you wanna be in that room when they start reminiscing?

Little Shop of Horrors: Director’s Cut
Hey, speaking of Frank Oz; most people who were both Fozzie Bear and Yoda probably would have rested on those laurels, safe in knowing they’d altered the face of pop culture for all time. But Frank Oz got bit by the directing bug on The Dark Crystal, and thus began the second phase of his career, one marked by a string of successful big-screen comedies shot through with his satirical sense of humor. Near the top of his filmography is his first real step away from Muppetland, a musical remake of a Roger Corman schlockfest from the ’60s called Little Shop of Horrors, starring Levi Stubbs as a carnivorous alien plant from outer space who completely upends the life of Rick Moranis. The Director’s Cut (now streaming, HBO Now) restores the film’s original, apocalyptic monster-movie-appropriate ending, one that gives the film the sort of mean-spirited bite felt in Oz’s other successes (Bowfinger, Dirty Rotten Scoundrels). Co-starring Ellen Greene, half the cast of Martin, struggling banjo player Steve Martin, and Bill Murray in what might be his best performance ever.

Roberta Flack: First Take 50th Anniversary Listening Party
One of soul’s all-time finest vocalists and songwriters takes over the Rhino Records YouTube channel at noon for a listening party celebrating the 50th anniversary of her landmark LP First Take, which is one of those albums that even if you swear you’ve never heard it, you’ve heard it—either via basic cultural osmosis, or due to the fact damn near every song on both sides became a radio mainstay over the last five decades. Don’t believe it? Refresh your memory by listening to the album below, and then hanging out with Roberta at noon today. Proceeds benefit Feed the Children.