Laconiko, a boutique Greek Extra Virgin Olive Oil company, based in Manassas, Virginia is the most internationally awarded Greek olive oil based in the U.S. and ranked among the world’s best olive oils each year. In May 2020 Laconiko was awarded another Gold Medal in the world’s largest Extra Virgin Olive Oil Competition in New York bringing its total awards won in the competition to ten. 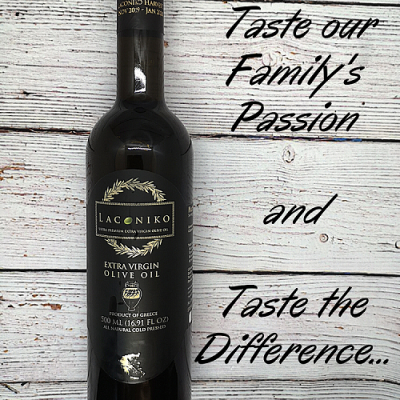 Although headquartered in Manassas, Virginia, Laconiko has been producing olive oil for over four generations in southern Greece. This year officially marks Laconiko’s ten year anniversary since first promoting and selling the branded Laconiko Extra Virgin olive oil to the U.S.

During the early years of inception, Laconiko started changing its production strategy, putting quality before yield. It was a time when few Greek producers were winning international awards. The two brothers, Diamantis and Dino Pierrakos, having excepted the roll as the next generation of producers for Laconiko, believed in its capabilities and wanted to show the potential of Greek olive oil competing among the best in the world. In 2010, Laconiko realized this goal, winning its first international medal at the Los Angeles International Extra Virgin Olive Oil Competition.

Since taking over as lead producers in 2016, after their father’s passing, Laconiko has won over 50 international awards, including the world’s most prestigious and competitive competitions in the world located in: the United States, Italy, Israel, Japan, Spain and China.  Laconiko’s goal has always been making an olive oil that reflects their Love, Honesty, Passion, Dedication and Commitment to the environment and to health.

Laconiko produces a single estate olive oil made from a single varietal, GMO Free Koroneiki olives, which are known for their high polyphenol (antioxidant) content in comparison to other olive varieties. Laconiko’s estate olives are always hand-picked and pressed within four hours of picking, and precise harvesting practices ensure quality that surpasses all standards set by the International Olive Council.

The Laconiko estate sees nine months of summer with abundant sunshine, drought and a cool ocean breeze coming off the Mediterranean.  The estate’s sandy soil acts as a natural filtration system, and as a designated Natura 2000 site, it’s protected from environmental contaminants and pollutants. Additionally, Laconiko implements all organic farming practices to further protect its natural habitat.

Thank you for allowing us to share our story and our passion with you. We are profoundly grateful!

With love, passion and dedication,