Delphon Curtis Jr. gives us the Hedwig / Beyoncé hybrid of our dreams. 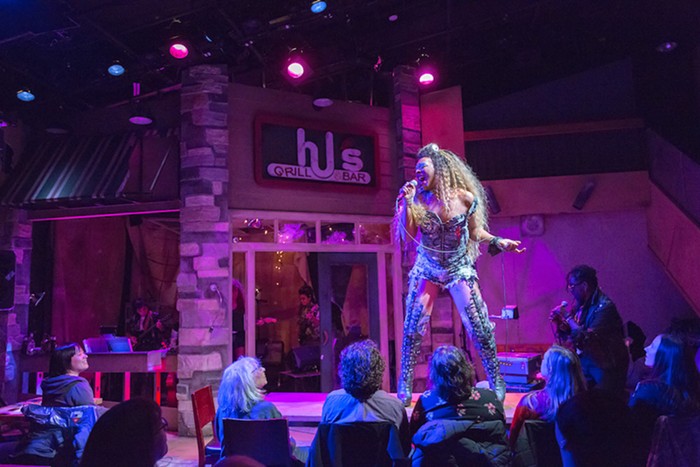 Hedwig and the Angry Inch started before I got there. As it happened, Yitzhak (Ithica Tell) stormed ahead of me into Portland Center Stage (PCS)’s Ellyn Bye Studio, shouting about the hysterics of “Beyoncé.” He grabbed a microphone and advised the audience of a delay (a ruse, we were still ten minutes from curtain) and set about helping those in the first few rows—which were at lounge tables—find their seats.

“Who is least shy?” he asked, in a heavy Eastern European accent. Then he warned, “There is a hazard to this space. Mistress will sweat on you,” alluding to upcoming moments when Hedwig (Delphon Curtis Jr.) would climb onto the tables in platform heels, to sing and dance into the fortunate first rows’ faces. “Mind your feet,” he imparted. “Because Mistress won’t.”

Tell adds a never-before-seen level of charm to Yitzhak—a role that calls for Tell to crossdress as a man—which brings the character into direct conflict for the spotlight. At the risk of offending previous Yitzhaks, THIS is what the role is meant to be. Curtis, as Hedwig, is revolutionary, astonishing, and very worthy of comparison to Beyoncé. It’s certainly a tall order, but Curtis’ singing style has a powerhouse soulful approach, which brings the vision of a Hedwig/Beyoncé hybrid out of our dreams and into the Ellyn Bye. 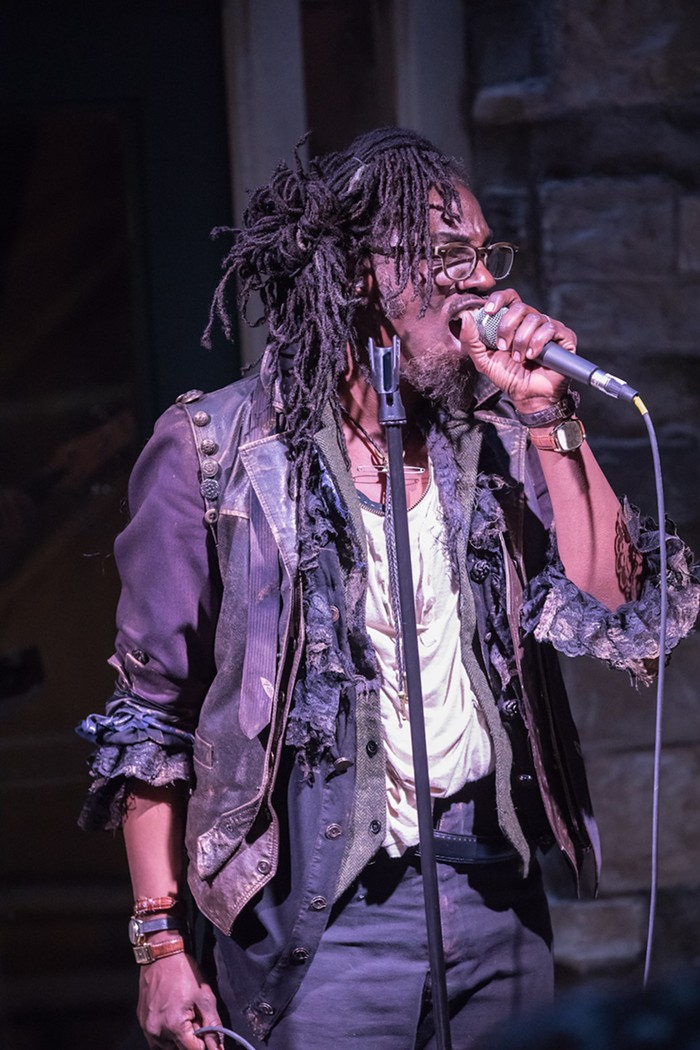 At this point, you can tell that PCS’ production of Hedwig is INCREDIBLE, which is why it is imperative that I also tell you it’s almost sold out. When you’re done with this review, you must buy tickets immediately!

Since it’s so popular, it might seem that Hedwig could have been staged upstairs, on the Armory’s main stage. But that would actually run counter to the show’s aesthetic and narrative. Hedwig must be in a small space because it’s meant to represent one night of her tour as she follows her former sweetheart—rock superstar Tommy Gnosis (also played by Delphon Curtis Jr.)—around the US. At multiple points in the play, Hedwig opens an exit door to hear Gnosis at the nearby Moda Center (the script encourages improvisation by location), playing the songs Tommy stole from her to his thousands of fans.

In 2014, when Hedwig finally hit Broadway, the only way that production’s director could think to have her believably play Broadway was to invent a musical (Hurt Locker: The Musical), say it failed, and claim she got the space super cheap. 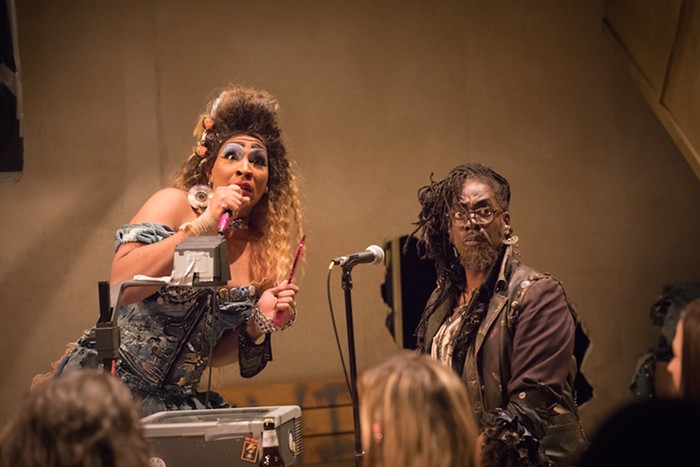 Hedwig’s story will be familiar to many due to the cult popularity of the 2001 film, directed by and starring John Cameron Mitchell—who also wrote the play with songwriter Stephen Trask. But seeing the stage version gave me an appreciation for the material on a whole new level.

Without the film’s eye-popping visual gags stealing the show, Mitchell’s layered and hilarious text comes to the front. And while Trask’s songs are earworm catchy, the film’s delivery is nowhere near as powerful—Curtis’ version of “The Origin of Love” had me near tears. Finally, the film doesn’t really convey the duality of Gnosis and Hedwig as strongly as the play.

Mitchell has said over the years that Hedwig is not about transgender experience as much as genderqueerness. At the start of the production, Hedwig wears an elaborate costume (her wig hair is curled around soda cans!), but the trajectory takes her on a striptease of self until she ends the performance nearly nude and stripped of her wig, performing as rockstar Tommy Gnosis. 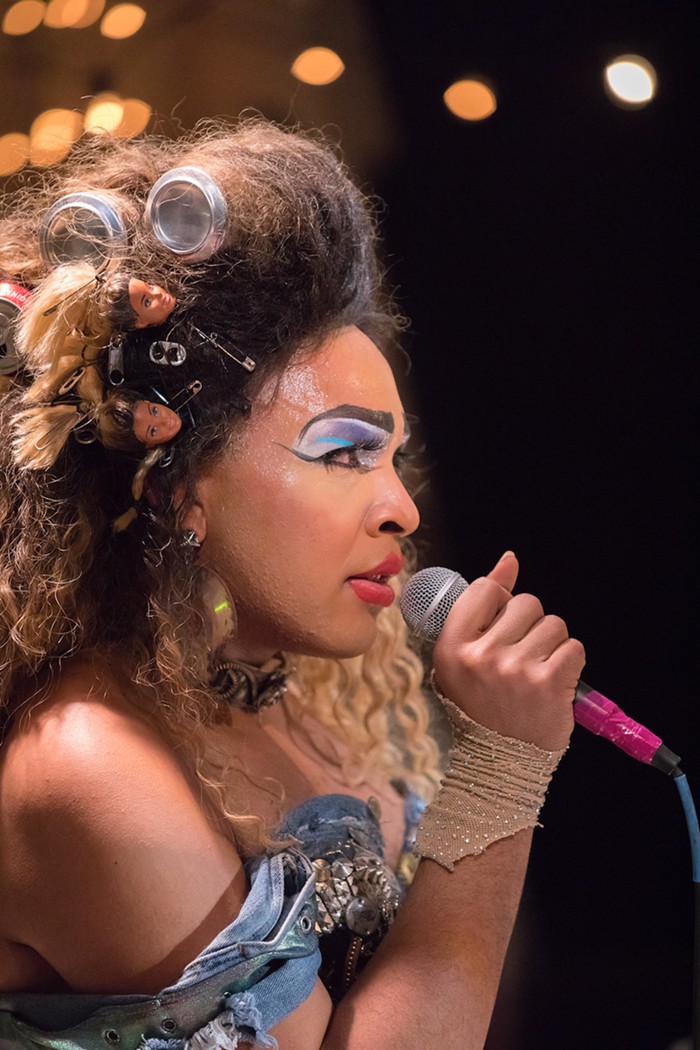 Since Hedwig’s been voicing her foils—like her mother and the American G.I. who brought her to the US—for the whole play, this isn’t a statement on masculinity as much as it’s about costuming, persona, and the way the things we want from our lovers are often things we already have in ourselves. It could also be about the imaginary line between masculinity, femininity, and whatever gender is represented when you’re crying in your underpants. Ultimately, Hedwig‘s meaning is up for interpretation. And that’s appropriate as Hedwig and the Angry Inch settles into its status as a glammed-up, fun, profound work of art.